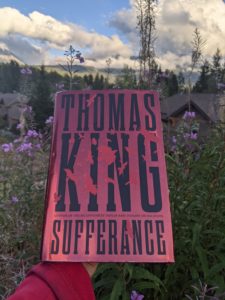 “We Exist at the Sufferance of Others.”

With these final words scribbled at the bottom of his last assignment, Forecaster left.

The protagonist of Thomas King’s novel Sufferance, Jeremiah Camp, a.k.a. Forecaster, could look into the hidden motives of humanity and see patterns that held opportunities for the uber-rich. He saw something that sent him into hiding in a small town, at an old residential school on an even smaller Indian reserve, with no phone, no internet, no television. His only news was received (reluctantly) through the local baker every morning. That is how he learned of the deaths, one by one.

After all, Jeremiah had created that list of 12 names, each one a billionaire. And now people on the list are dying, frequently. A bit too frequently. Ash Locken, head of the Locken Group, the multinational consortium that Jeremiah had fled, wants to know why. Would Camp break his silence and tell her what he saw? That question made me dart through this un-put-downable novel.

King paints a detailed picture of the sad realities and intricacies of surviving on a reserve. Camp’s day-to-day existence and interactions with the locals on Cradle River Indian Reserve are shockingly mundane, the struggles of these people real and the strange dynamics which keep the status quo as it is, poignant. His personal peace project of replacing wooden crosses with stone epitaphs for children buried in the residential school graveyard is especially heart-rending in the aftermath of the recent discovery of such graves in Kelowna. And the plot advances, interwoven with these descriptions.

King’s satire is incisive and yet, matter-of-fact. This crucial description, for instance, sits inconspicuously between banter around global warming in Jeremiah’s local community on one side and what his cat and he eat for lunch on the other. His sandwiching of key facts between otherwise routine details makes the entire novel seem like a maze through which the reader gets to collect clues. Moreover, through such juxtaposition, King has effectively pointed out the chasm between the world of riches and power, and that of the poor and powerless, but all in his strikingly nonchalant style. Ultimately, Jeremiah’s utter and complete resignation is unmistakable and almost painful.

Through Camp’s predicament, King explores some deeply philosophical questions, such as whether information is of any value, whether education can really change people’s circumstances and whether money is as powerful as we imagine. And perhaps most importantly, would immortality be desirable? In classic Steinbeck style, King alludes through this story that the seat of power is invisible and humanity’s demise inevitable.

Sufferance left me gasping for closure at the end of a thought-provoking journey through the eyes and experiences of Jeremiah Camp. And yet, I loved it all the more because none was provided.

Prajakta Kharkar Nigam is an economist turned writer. After years of living and working internationally, she is now perched on a mountain, writing essays about her multiple journeys on her blog at prajakta.medium.com and Instagram @nomadparents.

Award-winning novelist and short-story writer Thomas King will be in conversation with moderator and Ojibwe author Tanya Talaga at the Whistler Writers Festival’s Saturday Night Gala on Oct. 16 at 7 p.m. Tickets are available at whistlerwritersfest.com.