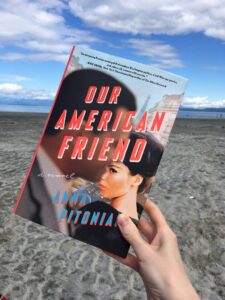 Now, I’m not saying that author Anna Pitoniak borrowed and improved some family backstory from a notorious American political family, or looked to the latest news headlines for her latest novel, Our American Friend, but the book could be ripped from the headlines and some very familiar political figures — which is what makes it so fresh and timely.

I think it’s safe to call Pitoniak’s latest work is current-events inspired. It takes some well-known elements from American politics, and lifts them to an extreme in all the best ways, like only a novelist can. In the book, the president is a big fan of Russia and behaves suspiciously where that country is concerned, the First Lady is a recluse born in a foreign country, and the conflict between truth, journalists and the cult of personality is at its zenith.

The novel focuses on the First Lady Lara Caine of the United States, who was born in Russia and married Henry Caine, an oil baron who becomes the president of the United States. Lady Caine was a model, married up, and lives in purposeful isolation in the White House with her children. Michelle Obama she is not. President Caine, meanwhile, is a divisive and polarizing figure who is happy to work with Russia on an oil pipeline and is generally unpopular with the left. Ringing any bells? These nods to a certain real situation in the White House prior to 2020 were what intrigued me about Our American Friend in the first place, even if they aren’t the central focus of the book.

No, the book is about folks much more important than a boorish president. The novel is about women with secrets that have the power to change the world.

Lara invites journalist Sofie Morse to come to the White House and write her official biography. For Sophie, it’s the scoop of a lifetime — Lara Caine is notoriously secretive. Lara and Sophie become close, far closer than is ethical, and Lara is candid about her past in Russia, her father’s work as an undercover KGB officer in Paris, her first love, and all her dirty laundry. Sophie doesn’t know what to make of Lara’s sudden openness, and before long she’s confronted with an impossible choice that forces her to decide who she’s loyal to: her friend, or her country.

The book is structured in flashbacks from the 1970s to the present day, and we follow Lara to Moscow, Paris, DC and New York. Pitoniak weaves in segments of the biography that Sophie is working on and brings all these pieces together to create tension and mystery in the lead up to the explosive ending.

It’s accurate to call Our American Friend a feminist spy thriller. The central figures are all women and it’s refreshing to see them operating in a fictional space most often and most famously filled with men and their exploits.

I particularly enjoyed Lara Caine’s flashbacks to her childhood and youth in Russia and Paris. Pitoniak brings the politics of the time into the novel and sets a visceral and realistic picture of international politics, and Moscow in particular, in the ‘70s and onwards. She captures the fear and paranoia of the times through the lens of a young woman finding her way. Even today’s modern Washington politics, although fictionalised, are sharply written.

Anna Pitoniak (who grew up in Whistler and now lives in New York) is part of the Thrills and Chills: Mystery and Crime Writers Panel on Saturday, October 15 at 1:15pm at the Fairmont Chateau Whistler and online. Tickets are on sale now.  See the review on the Whistler Pique.